My Senpai Is Annoying is an series by Doga Kobo. A studio known for their slice of life, style series.

This is about Igarashi, a girl who’s relatively new at a sales company. She’s 23 years old and is smaller than most people her age.

Her senpai at work is tall as F and in her own words, treats her like a child when praising or patting her on the head.

And a chilled in a similar environment or style, this is the one to watch matey. 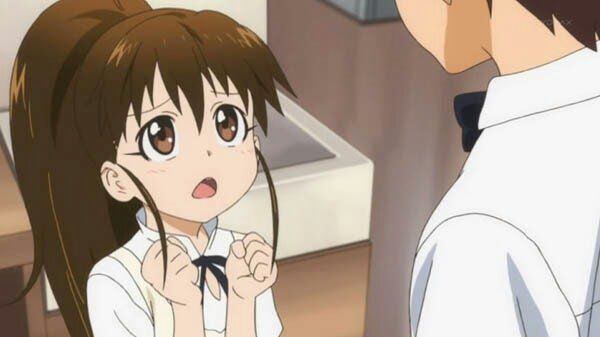 Working!!! has a similar format but it’s slightly different. The main character: Taneshima works at a family restaraunt. Like Igarashi, she’s on the “smaller” side.

This is an insecurity for Taneshima, but not to an extreme.

The focuses on her and other colleagues while at work in a slice of life format, with comedy thrown into it.

There’s hints of romance as well, making it similar to My Senpai Is Annoying!

2. Uzaki Chan Wants To Hang Out 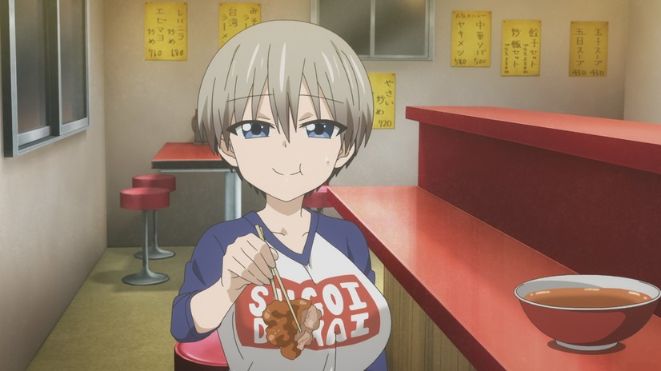 Uzaki Chan is an Ecchi series and a slice of life/comedy. It also has characters of an older age just like My Senpai Is Annoying.

You can expect fan service here though, which is a major highlight.

Hana Uzaki wants to hangout with Senpai, but he’s an and would rather be doing his own thing instead of being pestered 24/7.

Uzaki is annoying because of her persistence, but she secretly likes him. Though that barrier starts to break a bit as the flies by.

It’s the gender opposite to My Senpai Is Annoying, but not as clean.

3. Love Is Hard For Otaku 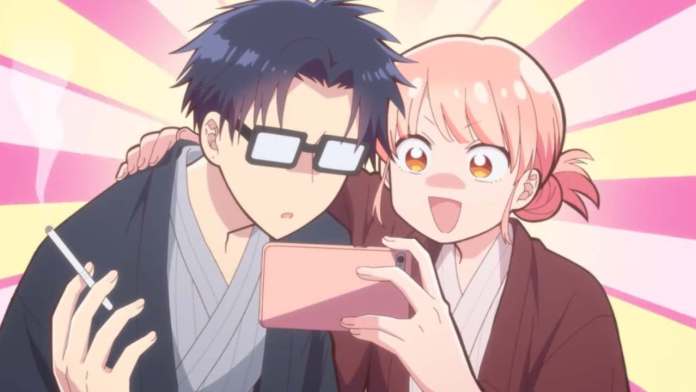 Love Is Hard For Otaku, or Wotakoi is about Narumi. She’s a girl in her early 20’s who complains about her past relationships.

She wants a type of man that according to her, is “her type”. Hirotaka, the other MC happens to be working at the same new company as Narumi.

They’re childhood friends and they surprisingly end up in a relationship despite Narumi’s reluctance… Because of her fantasy boyfriend she’s dead set on having.

If you wanna see soft romance between hardcore Otaku’s and weebs who cry, fight, argue and talk about , this is the one to watch.

It’s rom com for Otaku’s in a nutshell. Sometimes in a professional setting (at work). 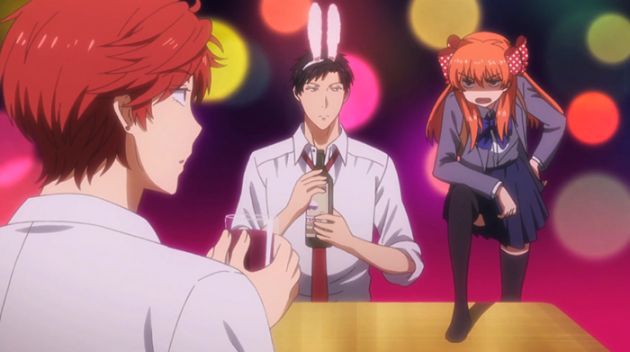 Chiyo Sakura, the orange haired girl has a thing for Nozaki Kun. He’s so dense he hasn’t noticed, but Chiyo isn’t the most direct about it either.

While most romance focus on the actual building of a relationship (or potential), Nozaki Kun is a parody of romance cliches.

Chiyo doesn’t get into an actual relationship with Nozaki Kun by the end of it, but the ‘s funny enough that it doesn’t matter.

That’s part of the point.

Nozaki in particular is a artist and that’s usually where his head is. He can be absent minded and funnier than his personality would seem.

Underrated comedy series which is also made by Doga Kobo! Maika-Chan is a new employee at a cafe that does things a little differently. The manager of the cafe is called DINO.

Each female employee plays a role:

Similar to a maid cafe, they’re role playing for their customers. Maika plays a sadistic role because she awkwardly gives people the wrong impression, which works to the managers advantage.

Misunderstandings, foolishness, dumb sh*t and wholesomeness. Blend S has it all, and it’s a short series. 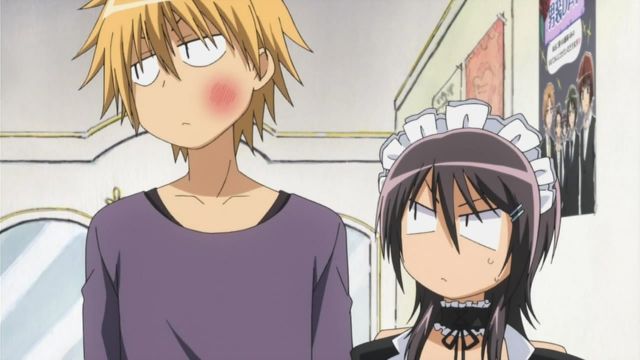 Maid Sama is not as similar than most comparable on this list. It’s Shoujo after all, but it is slice of life and rom com.

Misaki Ayuzawa is a masculine girl with a feminine look. She’s a man-hating feminist in the early stages of the series.

As student council president she favors girls, and does whatever it takes to invade male spaces and ruin them because she hates men.

Her hatred comes from family issues.

Usui Takumi, the love interest, is the guy who starts out being annoying to Misaki, and then ends up the guy she falls for.

He opens her eyes to what’s happening around her, her behavior, attitude, and more. This is the source of the changes she goes through later.

It’s a classic J.C staff series with some of the best romance and character development out there. 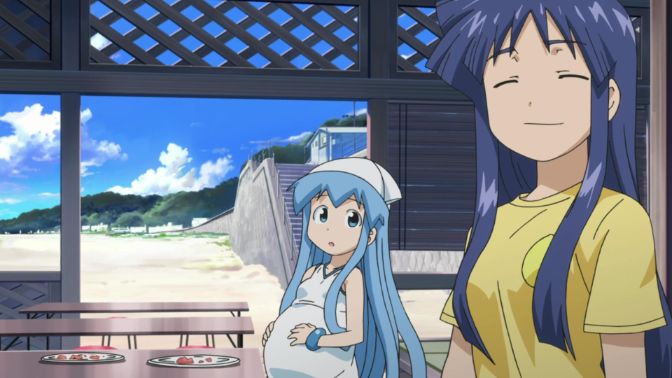 Squid Girl is about a girl from the sea who looks human, but her hair works like a Squid’s tentacles.

She’s supernaturally . But her goals to conquer humanity end when she damages the building of The Lemon Beach House.

As insurance, she’s forced to work there to make back the money for property damage.

It’s a slice of life but the comedy can’t be underestimated. It’s got Gintama levels of puns, parody, and humor. But not as extreme or outlandish.

Clever dialogue as well, especially in the dubbed version which I think is better.

8. Engaged To The Unidentified 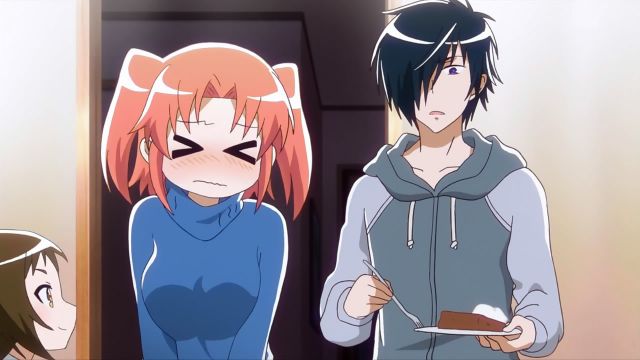 Kobeni Yonomori is 16 years old. She’s being forced to marry into the Mitsumine family without warning.

The man she’s to marry is called Hakuya, around the same age as Kobeni. So the sets the stage for the romance earlier than most comparable shows.

Being made by Doga Kobo as well, the art style, slice of life elements, and wholesome episodes will be familiar.

It’s about people who work at a store, packing up , distributing it, and more.

is their lives, and it shows in what they get up to, talk about, or even try to “hide” (closet otaku).

It does have its moments, but the earlier episodes of Denki Gai can get a bit weird and even extreme. Ethically.

Either way it’s relevant for this list so it has to be mentioned.

8+ Of The Greatest Anime Like Komi San Can’t Communicate