When you Google Mirajane Strauss, over 700,000+ results show up.

Which is even more than Bulma Briefs from !

Ever since adopted from the to in 2009, the series has took off.

With characters like Mirajane Strauss becoming one of the most well-known characters in the community.

Setting all that aside for a second…

Here are 16 girls who share the same English Voice actress as our white-haired model!

(That was a mouthful)

The voice actress behind these characters is Monica Riel (Thanks, Monica).

As popular as Misaki Ayuzawa is, even she’s not as famous as Mirajane Strauss.

That being said she’s more than deserving of this list from the fun show: Maid Sama!

Misaki dislikes boys (at least in the beginning) because of father-issues.

Besides that she’s fiercely independent, dependable. And a skilled fighter with a terrifying work-ethic.

And that’s what makes Misaki Ayuzawa such a strong female character. With more than just “good looks”.

You may not know about Yoshino yet as she’s a new female character.

Yoshino has an unassuming personality, meaning she’s difficult to figure out.

And it’s hard to tell what she’s thinking as she normally has a blank facial expression.

She’s loyal and will do whatever it takes to protect a friend. No matter what lengths she has to go to.

Making Yoshino the kind of girl you just don’t wanna mess with.

You may know Kayano Kaede from the school/comedy : Assassination Classroom.

She’s introverted and usually keeps to herself. Doing her own thing and not bothering anybody.

And like other Assassination classroom characters, she has a dark-side that makes her frightening.

Though deep down she’s one of the kindest, sweetest girls around.

If you’re a fan you probably didn’t expect this one. But it’s true.

Bulma’s voice actor in is the same English voice actress behind Mirajane Strauss.

Bulma is gutsy, a risk-taker, brave, and even a genius all at the same time.

As she spends her life building spaceships, gadgets, and running her fathers company: Capsule Corporation. A company that earns billions per year.

Which makes her one of the few real billionaires (or close) within the world of .

Sayaka is taken from Danganronpa, the video -turned series.

She has a certain innocence to her personality that you can’t help but be drawn to.

Though Sayaka Maizono is one to keep secrets and distance herself from others.

If you’re into Psychological ’s, give Danganronpa a go!

Tama is an L-Rig from the 2014 psychological series – Selector Infected.

She loves to fight and has a thirst for battle. Similar to the Saiyan race from .

And yet at the same she has the innocence of a child. Similar to the Fat Majin Buu from .

Tama’s character design matches her personality in almost every way,

Yu Kashima is loved by all the girls in the comedy/romance: Monthly Girls Nozaki Kun.

Kashima is seen flirting with the girls a lot throughout the series.

Physically she appears to be a tom-boy with short hair, and can easily be mistaken for a guy.

Yuzuha is a character featured in The One Being Sung. A mystery/historical :

In the she’s blind and unable to see. And has one of the purest hearts of any character ever created.

Yuzuha enjoys listening to others and sharing her advice.

And has a skill for making everyone around her feel at ease.

You may remember Kuzuha from the crazy comedy series: Chuunibyou. Mixed in with a little romance.

Kuzuha is the younger sister of the main protagonist: Utaha Togashi.

She’s dependable, her for her age and quite a laid back character.

One thing Kuzuha is embarrassed by is her brothers delusions and obsessions with being a Chuunibyou.

From watching the you can see Tsubaki is quite a tolerant person who’s kind and thoughtful.

And always puts the thoughts and feelings of those she cares about first. Before anything else.

And just like Black-Star, she’s a skilled ninja and fighter.

With a fierce amount of determination to accomplish whatever she sets out to do.

Kanan Chinami, one of the side characters from Denpa Kyoushi.

Or “Ultimate Otaku Teacher” in the west.

Kanan’s nickname is “ girl” because of her cute and unusual voice.

Junichirou Kagami (the main character) is the guy who gave her that nickname.

Tomoko is the awkward high school student from : Watashi.

Also known as – No Matter How I Look At It, It’s You Guys Fault I’m Not Popular!

She’s anxious, shy, introverted to the extreme, and is terrible at starting up conversations. Especially with strangers.

Despite her flaws, she has an unstoppable determination that pulls her through the obstacles she faces. And doesn’t know when to quit (even when things get depressing).

Iori Nagase is one of 5 main characters from Kokoro Connect. A Mystery/psychological series.

You know those types of people who are just fun to be around?

Who somehow are able to make everybody smile when you’re with them?

That’s what Iori Nagase is like. She has a fun, energetic personality. And is outgoing and extroverted.

No matter how hard her challenges are, she manages to wear a smile. Even when life starts to get a little heavy. 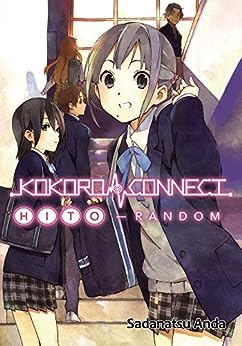 Kokoro Connect Volume 1 Check Price on Amazon
We earn a commission from Amazon & other affiliates if you make a purchase at no additional cost to you.

Mei Misaki is the main female protagonist from : Another. A dark/mystery series.

And you’d be part right. But the truth is she’s just different.

She doesn’t want to cause any trouble, and yet still manages to.

It’s because of this (and other reasons) why Mei Misaki has a tiny circle of friends.

And doesn’t go out of her way to make friends or communicate with strangers. Unless necessary.

Other Notable characters with the same English voice actress as Mirajane…

And a bunch of other characters not mentioned in this list. All voiced by Monica Riel!

What Anime Should I Watch? Here Are 17 Of The Best Recommendations