characters with pink eyes is one of the rarest eye colors in all of . You don’t see it too often.

And others seen in (orange being a very rare color as well). 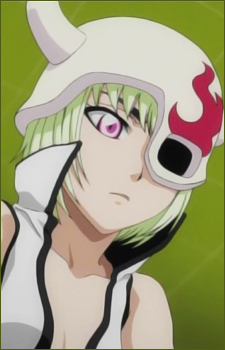 Lilynette is the other half to the character Coyote Starrk in the Bleach franchise. While they are split, Lilynette is clearly the weaker character.

During the Arrancar arc you can see this when Lilynette tries to fight Joshiro Ukitake, only to face an embarrassing defeat. He made her look like a helpelss child.

When joined up though Lilynette and Starrk’s form changes, and she herself becomes more . But she loses her “human” like form along with the pink eyes and outfit. 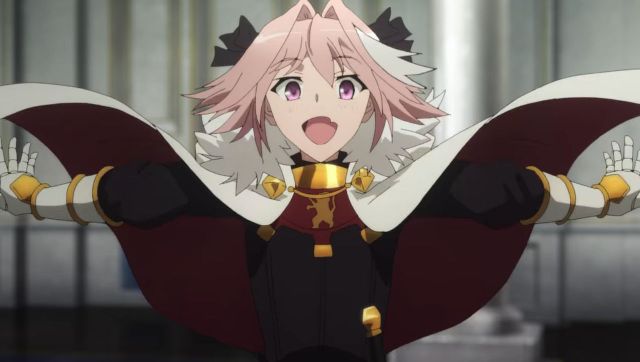 Rider of Black Astolfo has to be one of the most prominent TRAPS in all of . Jeanne D’Arc learns this the hard way.

Astolfo wears a skirt and feminine attire, and the pink hair and feminine eye lashes and oevrall looks doesn’t help the fact that he’s really a guy who’s crossdressing.

Since Astolfo is actually based on a historical character who was said to be the “prettiest” of the 12 knights of Charlemagne, it’s not too surprising.

His character design holds historical context and significance. It’s not all for show or shits and giggles. 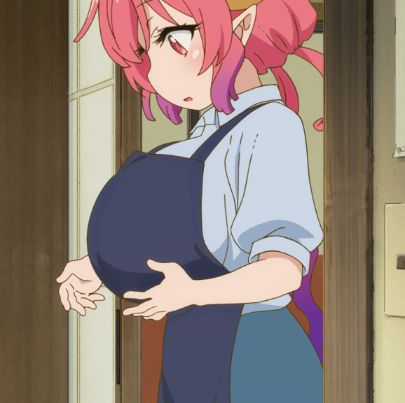 Ilulu is the dragon that shgows up during the 2nd season of Miss Kobayashi’s Dragon Maid. She’s a “chaos” dragon just like Tohru.

When she first shows up she’s bringing villain vibes to the table, and she and Tohru fight it out and it almost gets out of hand.

Once Ilulu starts to understand Tohru better, and the woman Tohru serves (Kobayashi) she opens her mind up a bit and that becomes her character development.

Unsurprisingly she’s been part of a few controversies on Twitter.

4. Satoko Houjou (Higurashi: When They Cry) 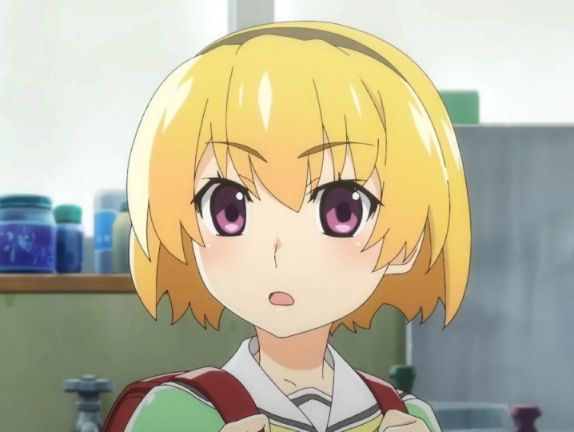 Satoko Houjou is a blonde kid from Higurashi who seems like an entitled kid and a bit of a little sh*t. But there’s a backstory and a reason for it.

She comes from a complicated home life. Her brother has gone missing and she’s abused at home and always puts ona  happy face when out in public.

Some fans dislike her but she’s far from the worst there is.

Related: 31+ Intense Anime Series That Are Too Mature For Little Kids Kyubey is the little white furry mascot looking character with a seemingly and harmless appearance. Kyubey offers to make Saya and Madoka “magical girls” in the .

What he doesn’t explain is the consequences of becoming a magical girl.

The race of creatures Kyubey comes from don’t value human life and see them as inferior and disposable. But the pink eyes and appearance is part of the deception. 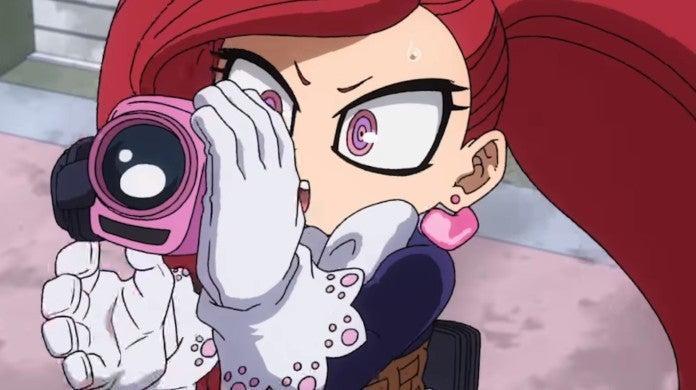 La Brava is the kid from , or at least the smol character who shows up towards the end of MHA season 4.

She works with Gentle Criminal to commit crimes he believes to be “right”. Despite his callous attitude and confidence in committing crimes, La Brava supports him.

She respects and loves Gentle Criminal and this is why she’s able to look past and overlook his actions as a thank you for caring for her. 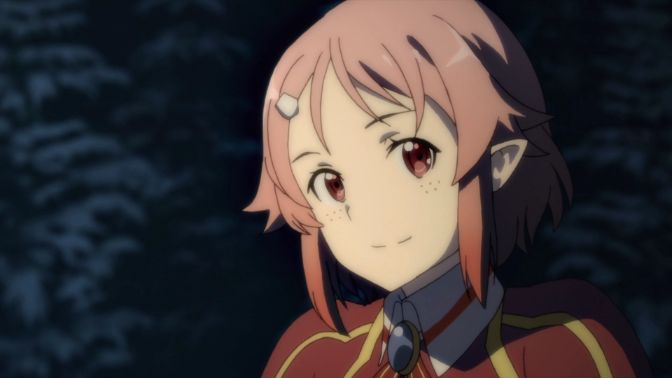 Lisbeth from is one of the first female characters to show up after Asuna Yuuki in season 1. And she’s consistently shown through every other season.

Pink hair, pink eyes, and an outfit to match. Lisbeth is cheerful, likes to tease, is an and enjoys the company of others.

She’s loyal and respectful as shown when she doesn’t interfere with Kirito’s relationship with Asuna.

8. Raphtalia (The Rising Of The Shield Hero) 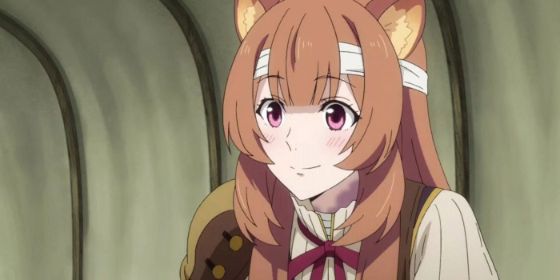 Raphtalia is the racoon girl who many memes are made after, sometimes from other than Shield Hero itself.

She starts out as an insecure character and a fragile girl who needs protecting. This is because she was enslaved and traumatized.

Naofumi buys her and partners with her in the early stages of his journey and because of Raphtalia and her growth, Naofumi learns to become trusting again.

Rikka Yanagi is the girl who wears a white shirt in World’s End Harem. She has orange/blonde hair makes her first appearance after the half way mark of the ’s 1st season.

Unlike other girls in the Rikka isn’t shy about pursuing other boys, mainly Shoto, and being sexually aggressive without any hesitation.

She likes Shoto and isn’t afraid to show it or make the first move, whch makes the Shoto take a step back from the overwhelm.

10. Shuna (That Time I Got Reincarnated As A Slime) 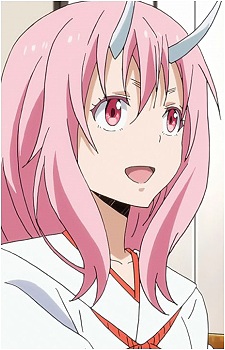 Shuna is the pink haired bodyguard of Rimuru Tempest. She’s one of many who sticks by Rimuru’s side and isn’t too far away from him on multiple occasions in the series.

Unlike Shion, Shuna is a lot more kind and gentle. Especially on the surface. But she does have a violent side and can even be considered a Yandere of sorts. 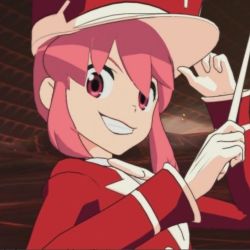 Nonon Jakuzure is another pink haired girl with pink eyes, and one who’s got a mouth on her. Her fashion sense is unique.

Being a person who’s art of the Marching Band and has a baton, her outfit only makes sense. She’s strong being one of the ’s elite 4.

No other character in the has a loyalty like Jakuzure’s when it comes to their queen Satsuki Kiryuin. 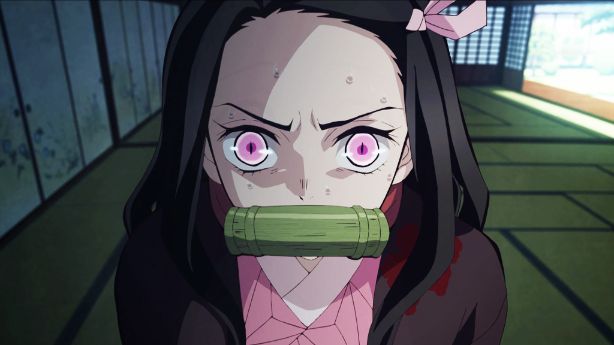 Nezuko, the demon little sister from the series that everyone has become so fond of. She may be a demon, but she retains human aspects.

Her role in starts out as the one being protected by her brother Tanjiro. But quickly that changes and both Nezuko and Tanjiro are out to protect each other.

Nezuko is strong, undeniably , is able to kick the heads off demons, but retains her compassionate and caring human side which balances out her characteristics.

Black hair, pink eyes, and a relatively small body unless transformed into her demon form. It’s a unique look. 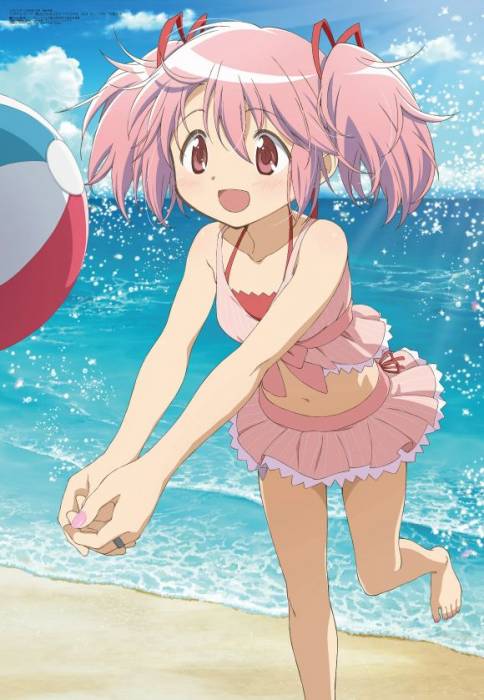 Madoka Kaname is the first protagonist of the series and one of the major ones aside from other secondary protagonists.

She’s too kind for her own good, a little on the weak and fragile side, doesn’t have a violent bone in her body and can be a bit of a coward.

Once she meets Mami Tomoe, a veteran magical girl, she becomes inspired by her and uses Mami as a goal to reach out for. And make something of herself.

She’s not necessarily the most compelling protagonist, but her relevance to the show is why she’s important. 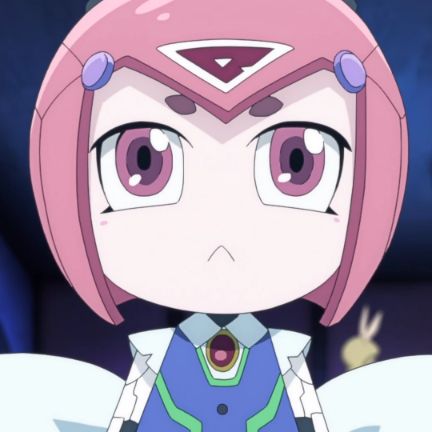 Pino is the little robot girl first seen in the early episodes of Edens Zero. Rebecca Bluegarden and the young scientist run into Pino.

Despite being machine like she’s no different to a fragile human kid who understands nothing about the world around her, making others want to protect her.

She becomes an important character later on. 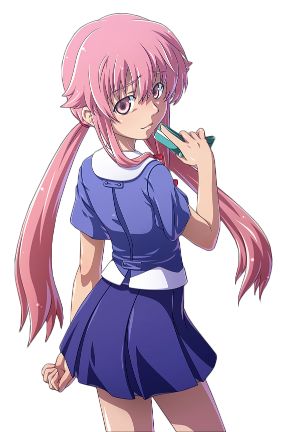 Yuno Gasai is the classic Yandere with pink hair, pink eyes, and every red flag going for her as a character. Growing up in an abusive household does that.

She’s obsessive, and outright psychotic when it comes to her obsession with Yuki Amano, a kid with no self confidence who is easy prey for someone like Yuno.

Being a “cute” girl is the part that deceives people into thinking she’s a normal, sweet girl. But she’s anything but that and lives a disturbed lifestyle. That’s true even if you ignore the supernatural plot. 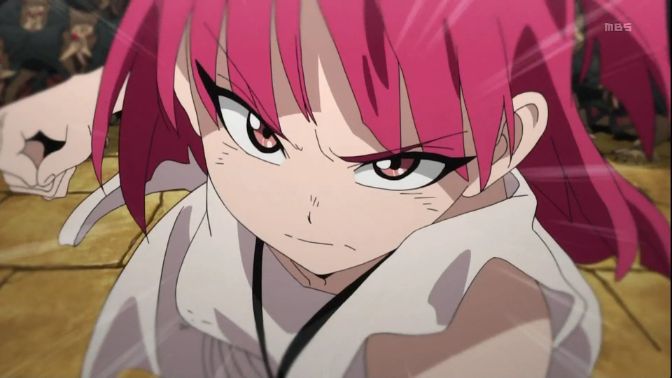 Morgiana is an ex-slave with pink/reddish hair. A maroon color. She has pink eyes to go with her look.

She’s from a race called the Fannalis which is actually based on African people, and she’s from the “dark continent” which is another reference to this.

Morgiana is physically strong and able to overwhelm almost all opponents with her physical strength alone. Capable of crushing a tiger’s skull with a single kick.

Her goal in life is to help those who are being oppressed so they can live a happier life with freedoms the way she had the opportunity to do after escaping her captors. 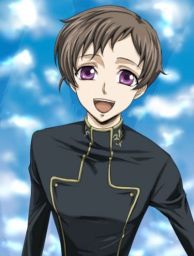 Rolo is the younger brother of Lelouch Lamperouge, and the one who is essentially a male Yandere for his older brother. He’s an extremist in this way.

As a character it’s clear Rolo is weak and nowhere near as useful as Lelouch, especially in the military regardless of their “Geass” powers. But Rolo does have his merits.

He does take a dark turn in season 2 (where he first shows up) and he’s a hated character for a couple of reasons. 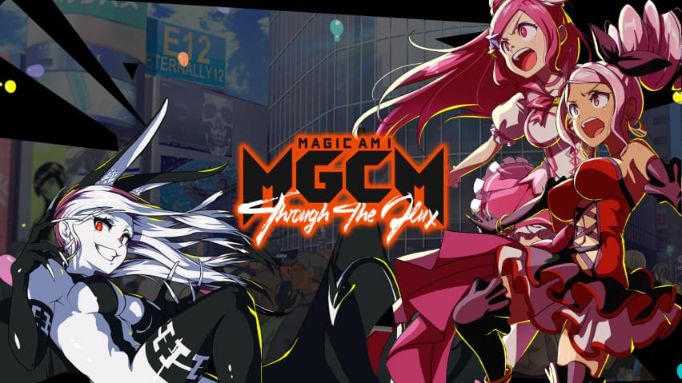 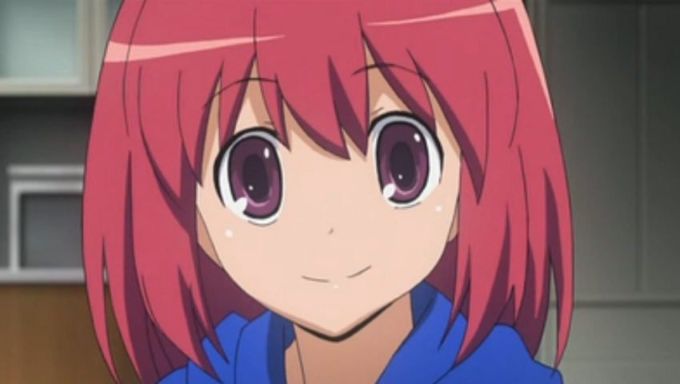 Minori Kushieda is a character with pink eyes, and also pink/reddish hair. Or “maroon” to be exact like Morgiana.

Cheerful, chipper, outgoing, friendly, and sometimes over the top. She has too much energy and is hyper as F. But that’s part of her charm.

Being a naturally funny character and one who sometimes can’t be taken seriously, she makes up the bulk of the ’s comedy. Or at least some of its best moments.

This is also true for the ’s sad, emotional episodes despite being a side character. 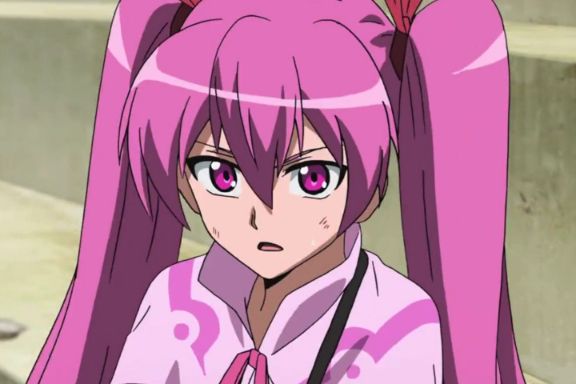 And lastly there’s Mine from . A pink haired, pink eyed assassin who uses a weapon she nicknamed “Pumpkin”.

This gun can fire burst shots and can also be used as a sniper rifle. It converts mental energy into physical energy, which shoots out as a high temperature beam.

Mine can seem like an ass at first because she’s straightforward and direct, but she does have a softer side she hides and is more compassionate than she seems given her line of work.