Anime characters come with all sorts of:

And many other features. Many of them are unrealistic by . That’s the way it’s supposed to be.

Sometimes though there are realistic elements and designs. Case in point with anime characters who have brown eyes. Much more real than purple or yellow.

Thus makes the anime characters with brown eyes more true to life as far as and more akin to a real person.

Let’s talk about these characters in particular. Mikoto Misaka is a character with some of the most similarities to myself… Ignoring the Tsundere stuff you see in the Index franchise in particular.

In the world of academy city filled with millions of espers, Mikoto Misaka is ranked 3rd out of only 7 espers who have reached level 5. She has brown hair and brown eyes.

Criticized for her tomboy-ish nature at times, she wears boy shorts, kicks vending machines to get free drinks, is a bit of a rebel, but has the best intentions and ranks high on the morality scale.

She also changes her outfit more than most main characters which makes her different and avoids the typical cliché. Shikamaru Nara is the once lazy anime character from the Naruto series. As a kid he enjoys chilling, kicking back, and just relaxing and having his own space.

Sometimes he enjoys personal time with his friend Choji, and the two are close friends in the anime.

As he matures in Shippuden he starts to make more of an effort with things and his life changes in a dramatic way which helps trigger it. And this is more true in the Boruto series as a family man.

If you’re talking about intelligent characters in anime (not just Naruto), Shikamaru is definitely up there and few can compare when it comes to this trait.

When he puts his mind to it he can accomplish more than most would think. Taiga Aisaka is the palm top tiger of the show (her nickname). She’s SMOL, and this is naturally a bit of an insecurity for her. She has brown hair and brown eyes.

She’s an absolute b*tch in the beginning of this rom com series, pestering and annoying Ryuuji Takasu and even abusing him. But this changes in true Tsundere fashion.

Taiga’s character development and the way the anime handles the Tsundere cliché is a lot better than comparable anime and it’s the reason why the anime is so good. Anime Wall Art & Posters on Sale Shop for Anime Wall Art
We earn a commission from Amazon & other affiliates if you make a purchase at no additional cost to you. Light Yagami aka Kira is a character who people have grown to love, be obsessed with, or they’ve come to dislike or not be too interested in him.#

Some fans think he’s overrated along with the anime.

He has brown hair, brown eyes, and resembles a realistic looking character aside form the animation effect. And if it wasn’t for the he would have lived a fairly moral lifestyle.

The “Death Note” transformed and warped his personality and that’s one reason why turned out to be such a killer anime series. Yui Hirasawa is the 17-18 year old girl who’s stature doesn’t give off that impression. And her childish, upbeat personality doesn’t help either.

She’s care free, a bit if a rebel, likes to take risks, can be a nuisance and has brown hair matching her brown eyes.#

Her personality and the comedy that comes from her involvement in the anime is what makes K-On what it is. She symbolizes what K-On is and what it’s about. Erza Scarlet has striking red hair like Emi Yusa, so it’s easy to overlook her dark brown eyes since the color red is so strong and easier to notice.

She’s a warrior, a knight. A swords woman who trains, works hard on herself, lives by strong morals and principles, and will never waiver on her beliefs.

She embodies the definition of “I’ll die on my sword” because her ethics are unbreakable.

Unlike other characters, Erza is comfortable around others, even Men when she’s naked. Though this is more about the guild being family and her seeing it as such. So she doesn’t see it any other way. Mikasa Ackerman needs no introduction really. She’s a feisty character and a woman who stands on her own 2 feet and doesn’t take disrespect from anyone. Most of all not anyone disrespecting Eren Yaeger.

She has simple black hair, brown eyes, and a semi realistic figure. In fact a lot AOT characters are more true to life than other anime.

She’s also trained in martial arts just like Anna Leonhart’s and most wouldn’t dare to test their luck with Mikasa. Asuna Yuuki is the female protagonist of SAO and the first female character introduced to the series who’s relevant and connected to Kirito (Kazuto Kirigaya).

She’s actually a bit introverted and aloof when she’s first introduced with her hood over her head. But she starts to open up and her relationship with Kirito begins.

While she does have her moments as far as “Plot points” and writing, Asuna’s role in the SAO series only gets better over the seasons. And this is shown again in season 3. Nagisa is the fragile girl from Clannad, and one of the main characters and first to show up in the anime series. Her relationship with Tomoya is casual at first.

As they both hang out together in school and start to become more familiar, their “high school sweet heart” relationship gets real and they become an official couple.

In the 2nd season of Clannad Nagisa’s personality, not just her relationship evolves and is taken to a new level. And that’s where the emotions start to get heavy. Ichigo Kurosaki is one of the more unique protagonists in the world with different motivations that aren’t cliché and typical. He just wants to protect his friends and that’s it.

It’s not about becoming more powerful, reaching some random goal, or worse – the idea of “justice”. This makes Ichigo realistic and relatable instead of being unrealistic.

He’s also one of the tallest anime characters with hair much brighter than his eye color (brown). Tsunade is one of Naruto’s best female characters and one of the legendary Sanin. She’s looked up to by many, and admired for her strength, skill, and talent. Blonde hair and brown eyes.

She’s the mentor for Sakura Haruno and is the reason Sakura becomes so powerful in Shippuden, not to mention the reason she becomes a skilled medical ninja. Despite having the potential for it already.

Tsunade’s hardships weigh heavy on her shoulders but she overcomes them and a lot in her life, and has a softer side than she usually likes to show people. Revy Rebecca is considered one of the most tomboy, so called “bad ass” characters in all of anime. Not just for a female character. She’s got a mouth on her.

She swears a lot, is gruff, abrasive, straightforward, and more than just a little rough around the edges. She grew up in the ghetto as a Chinese American and experienced harassment plus abuse from police.

Her traumatic experiences toughens up her soul and spirit, and now she’s a gunslinging girl who works for a smuggling company. And she’ll shoot first without caring for questions later.

She’s a perfect example of how your environment shapes you as a person later in life. Wendy Marvell is one of ’s best written anime characters, female or otherwise. She doesn’t get as much shine as she deserves when it comes to this aspect.

She’ starts out as the shy girl who’s scared of people, never mind fighting or being stuck in dangerous situations. As a dragon slayer though she has the clear potential.

As she matures and her character develops this changes a lot and she starts to come into herself in the story, and she easily becomes one of ’s most memorable characters.

Long blue hair, brown eyes, and an air of innocence makes up her character on the surface. The girl who blushes only when she’s around Deku or when others talk about Deku in conversation to Uraraka…. She’s a little love sick but enough to not herself go.

Her goal is practical, straightforward, and not wishy-washy like many of your typical characters. This is what makes Ochako’s character so attractive to begin with.

Brown hair, brown eyes, big smiles, and more dedication than most would assume if judging from the surface. Haruhi Suzumiya is an eccentric character who doesn’t follow the usual rules, logic, normal thinking, or the normal ways of doing things. She’s unconventional in that way.

She follows her own beat, her own rhythm, and seemingly does as she pleases. She’s a leader in this way and isn’t one to sit around, follow, and wait on instructions for what to do.

She’s one of the most famous anime characters from Kyoto Animation, and the anime itself is a mystery/slice of life series with some and comedy elements. Osamu Dazai is another character in anime who’s eccentric but his eccentricity is on another level. He’s weird in obvious ways and most can’t make sense of him. Like many characters on this list he has brown hair and brown eyes.

One common thing with Dazai is his desire for a double suicide and suicide in general, as seen in the first few episodes. He talks about it like it’s nothing serious.

When you look into Dazai’s backstory everything starts to connect but it still doesn’t explain his usual jolly nature. He’s a character who’s hard to dislike. Zenitsu has blonde hair with red outlines, and golden brown eyes with an overlay of yellow covering his black outfit.

As a character he’s a coward who’s always moaning, crying, complaining, or being too afraid of something. His mentor could see this as well.

Zenitsu’s character progressions does make him less like this in some ways, but the one time he changes is when he sleeps and his subconscious takes over in a battle. Like a split personality. 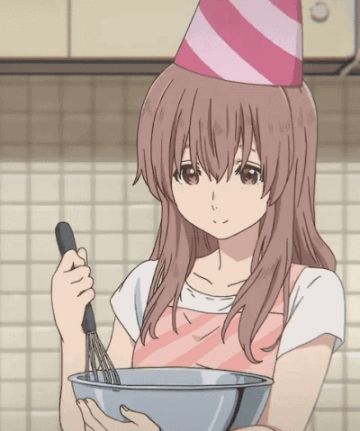 Shouko Nishimiya is the girl from A Silent Voice who’s:

And ultimately the girl who’s traumatized by her school experiences being a def disabled girl who has no idea what she did “wrong” to deserve this.

The story shows how later in life it deeply affects her personality and their way of living. She loses confidence, her self esteem is crushed, and she’s barely hanging on for dear life.

Even when one of the bullies who took part meets her, apologizes, and does everything he can to reconcile, it’s almost not enough for Shouko to overcome her demons.

If you want a meaningful story with a meaningful character, Shouko (and this anime movie) is the perfect thing to start getting into.

19+ Anime Characters With Red Eyes You’ll Fall In Love With!