Akira is a legend in the industry. And one of the pioneers of modern day ‘s success.

It might be unknown to “Modern” day fans, but we have a lot to thank it for. And with classic comes classic quotes!

Let’s share the BEST of the BEST and take you down memory lane. 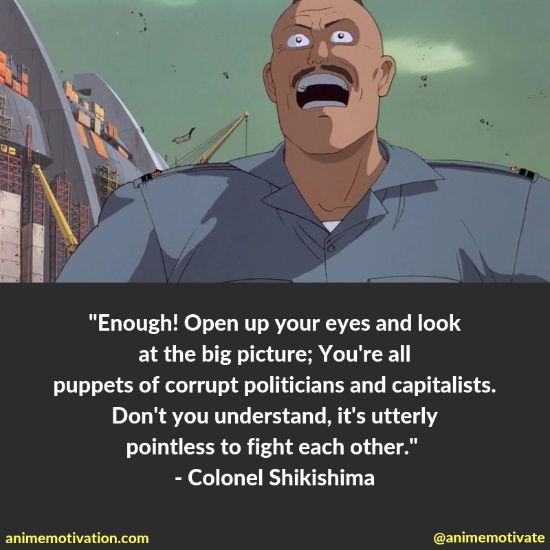 “Enough! Open up your eyes and look at the big picture; You’re all puppets of corrupt politicians and capitalists. Don’t you understand, it’s utterly pointless to fight each other.” – Colonel Shikishima 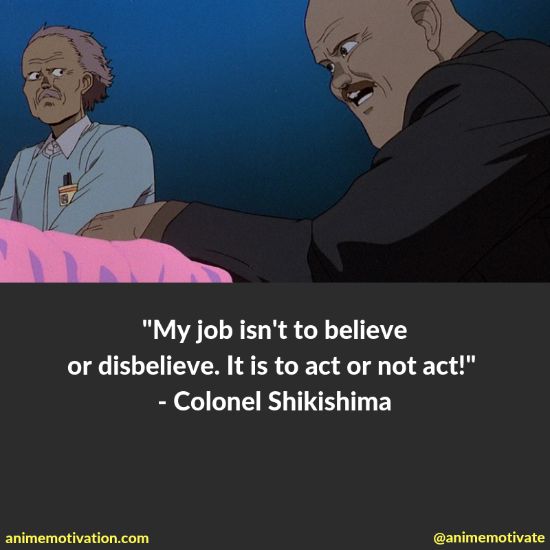 “My job isn’t to believe or disbelieve. It is to act or not act!” – Colonel Shikishima 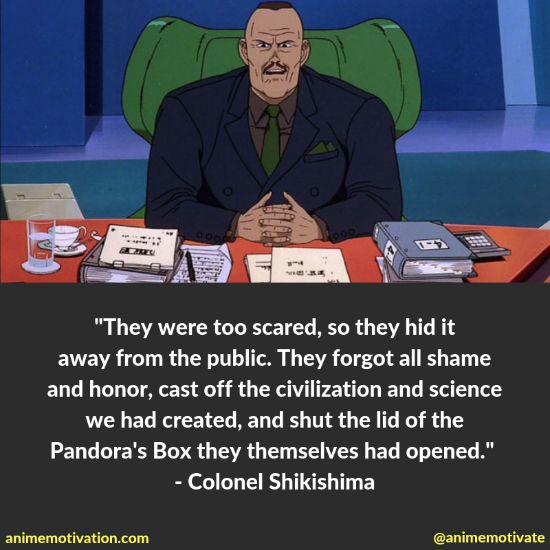 “They were too scared, so they hid it away from the public. They forgot all shame and honor, cast off the civilization and science we had created, and shut the lid of the Pandora’s Box they themselves had opened.” – Colonel Shikishima 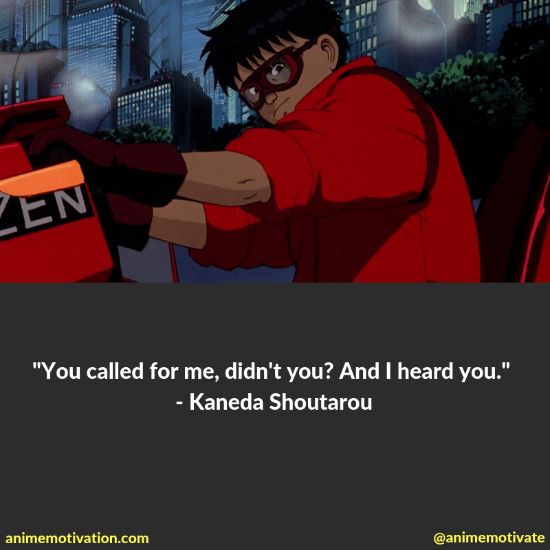 “You called for me, didn’t you? And I heard you.” – Kaneda Shoutarou 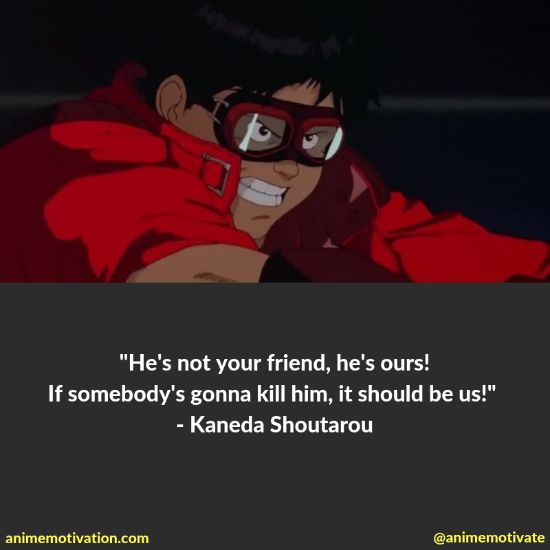 “He’s not your friend, he’s ours! If somebody’s gonna kill him, it should be us!” – Kaneda Shoutarou 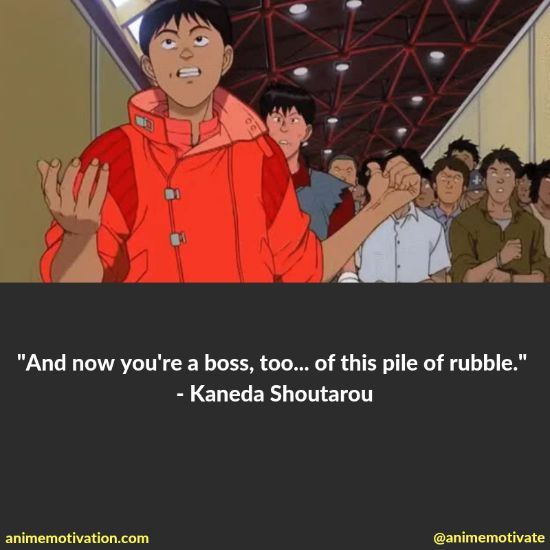 “And now you’re a boss, too… of this pile of rubble.” – Kaneda Shoutarou 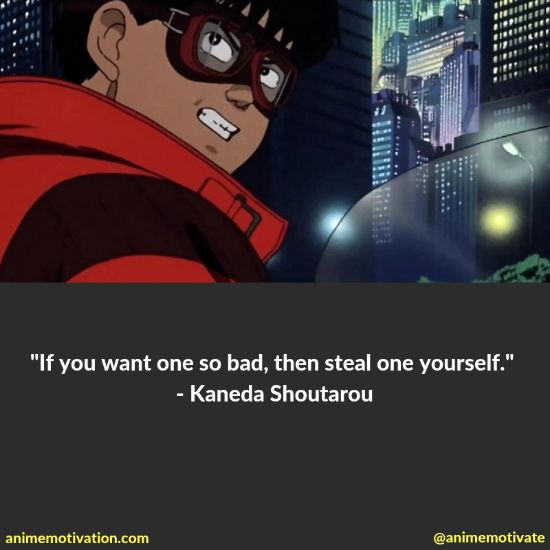 “If you want one so bad, then steal one yourself.” – Kaneda Shoutarou 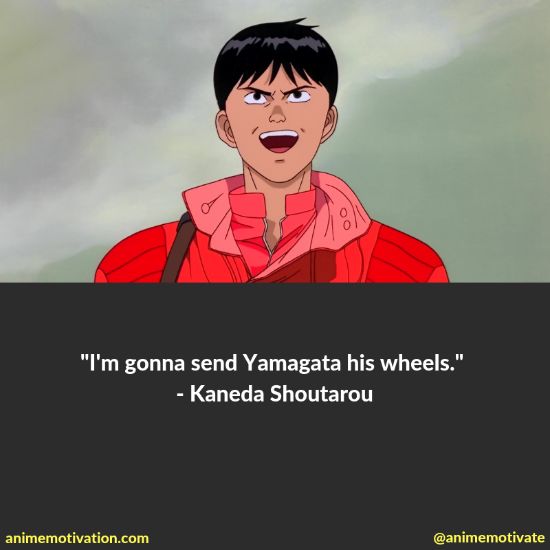 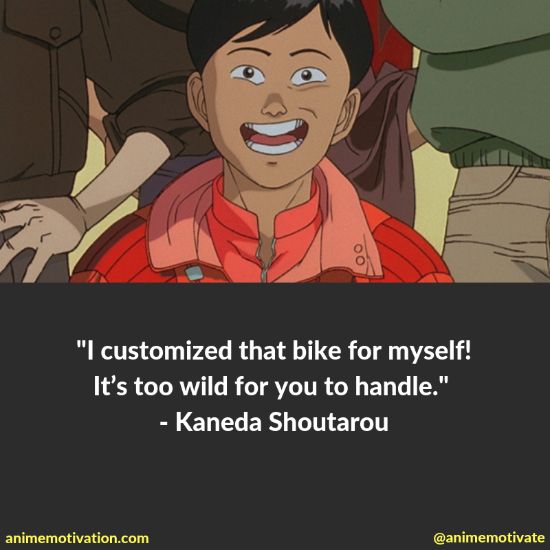 “I customized that bike for myself! It’s too wild for you to handle.” – Kaneda Shoutarou 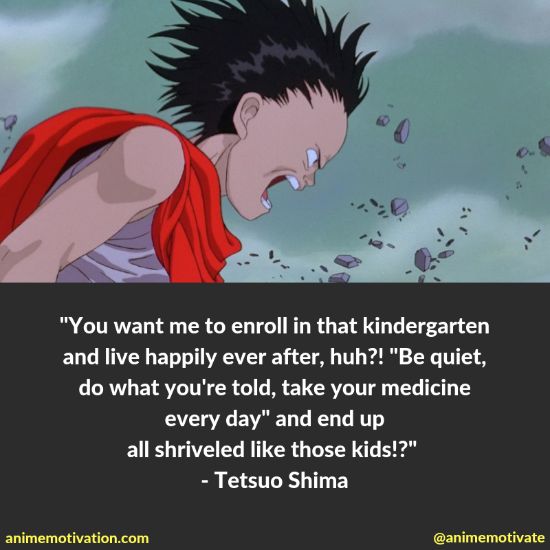 “You want me to enroll in that kindergarten and live happily ever after, huh?! “Be quiet, do what you’re told, take your medicine every day” and end up all shriveled like those kids!?” – Tetsuo Shima 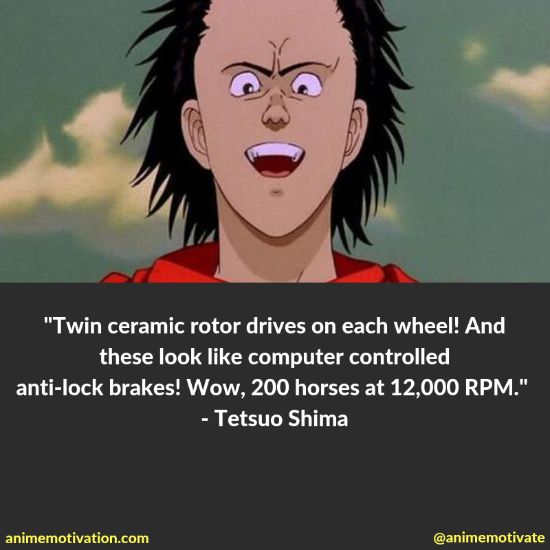 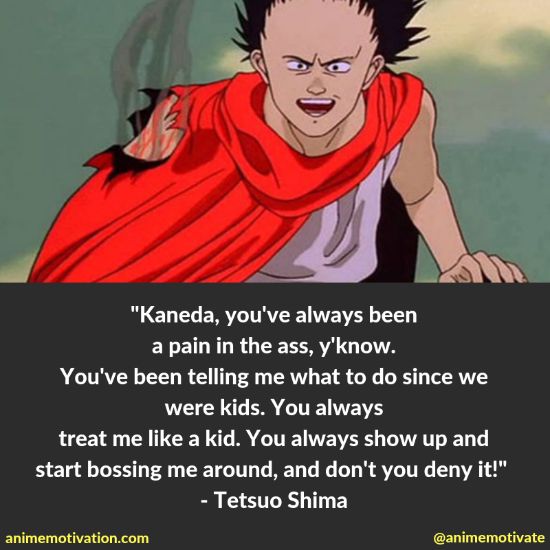 “Kaneda, you’ve always been a pain in the a**, y’know. You’ve been telling me what to do since we were kids. You always treat me like a kid. You always show up and start bossing me around, and don’t you deny it!” – Tetsuo Shima 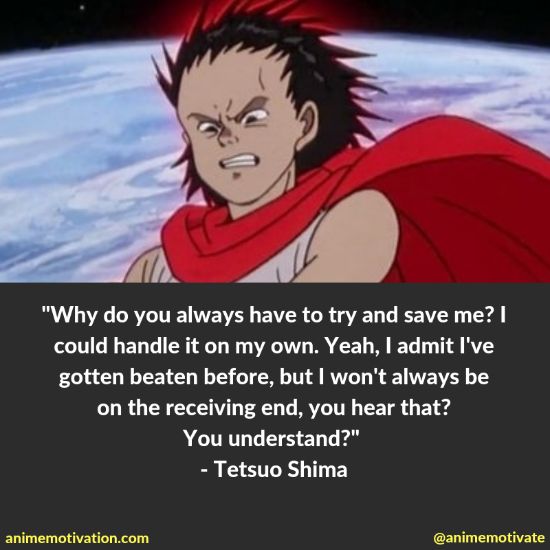 “Why do you always have to try and save me? I could handle it on my own. Yeah, I admit I’ve gotten beaten before, but I won’t always be on the receiving end, you hear that? You understand?” – Tetsuo Shima 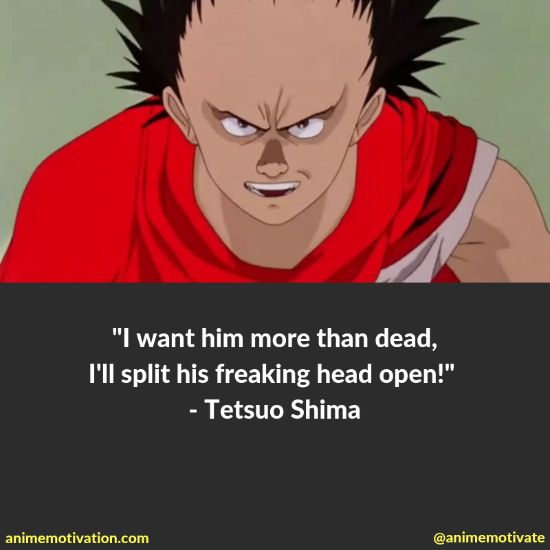 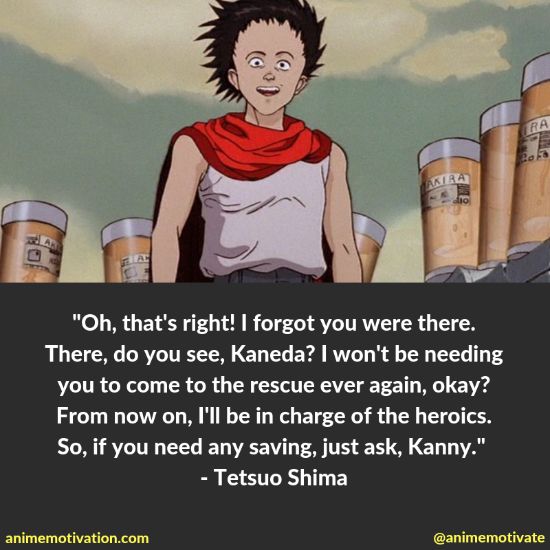 “Oh, that’s right! I forgot you were there. There, do you see, Kaneda? I won’t be needing you to come to the rescue ever again, okay? From now on, I’ll be in charge of the heroics. So, if you need any saving, just ask, Kanny.” – Tetsuo Shima 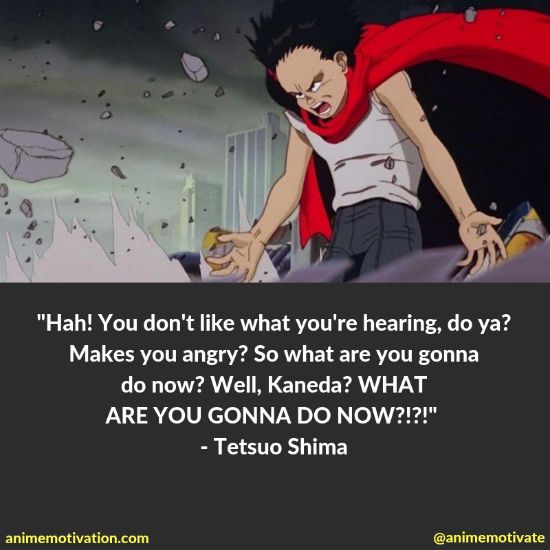 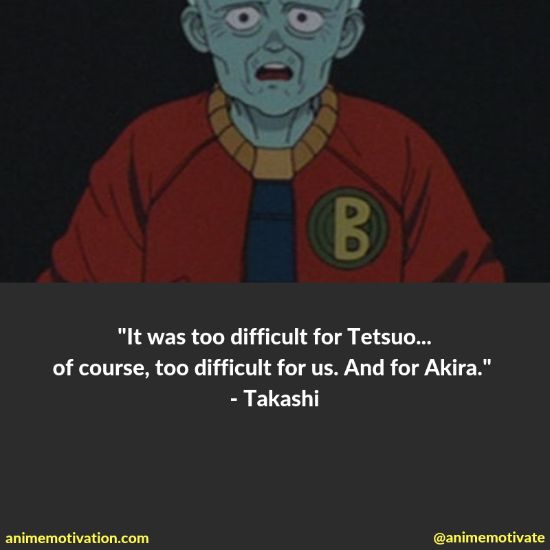 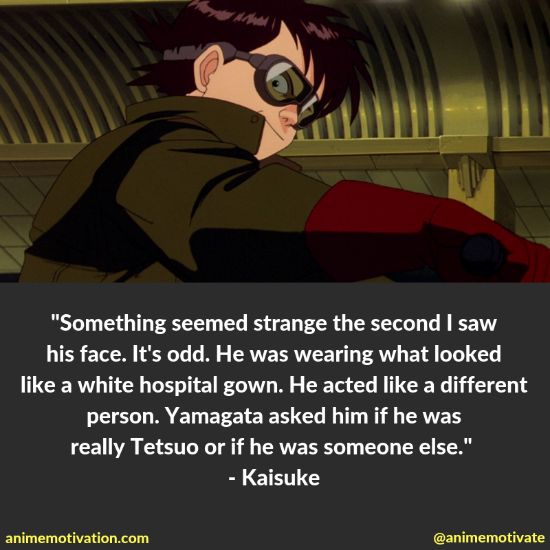 “Something seemed strange the second I saw his face. It’s odd. He was wearing what looked like a white hospital gown. He acted like a different person. Yamagata asked him if he was really Tetsuo or if he was someone else.” – Kaisuke 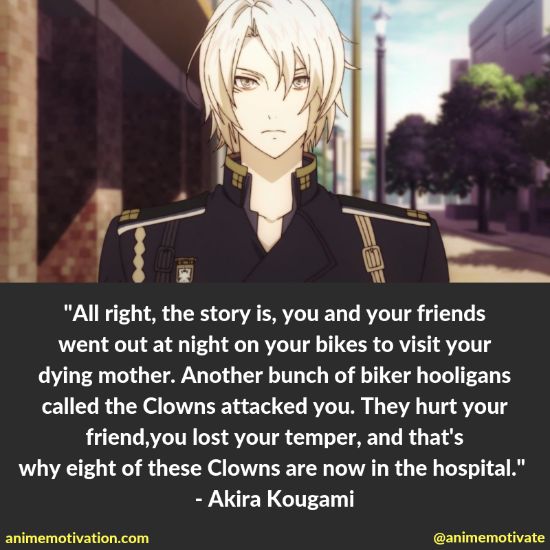 “All right, the story is, you and your friends went out at night on your bikes to visit your dying mother. Another bunch of biker hooligans called the Clowns attacked you. They hurt your friend,you lost your temper, and that’s why eight of these Clowns are now in the hospital.” – Akira Kougami

“I’m not that much older than you, so don’t call me pops or you’ll find yourself polishing’ my boots with your tongue.” – Police Officer

All these quotes are from the “new” DVD dub from Pioneer (that was re-translated) made in the 2000s, not the original Orion VHS dub, so they just all sound wrong to me. (I’ve heard the blu-ray has both dubs but I don’t have it yet.)

Also, that last picture of the blond guy isn’t from the movie. It’s not even the same art style.